Week 6: Which is the real cowboy?

Written in 2009, Errol Morris’ series, The Case of the Inappropriate Alarm Clock, already seems quaint. In 2016, is there anyone who looks at a photograph without a healthy degree of skepticism? Then again, judging by some the memes I see parading down my Facebook page, perhaps I’m still in the minority.  As Kater pointed out, Reuters had already been caught in 2006 publishing altered photographs, and several other news organizations were caught doing the same thing during that period.

Going back to my own collection of photographs of the JA Ranch, I thought that this juxtaposition helps to further illustrate how an image may be manipulated by the subject as well.

The first image is a candid photograph taken of JA Ranch cowboys breaking for a meal on the range.  Their backs are to the photographyer and they appear unaware of the camera’s presence.  The long shadows tell us that the sun is low on the horizon; this is either a morning or late afternoon break.  The clothing is work oriented: denims, chaps, boots, and jackets.  The hats are pulled low and forward to block the sun. The meal is simple and the postures of the men are not relaxed, suggesting a need to eat quickly and get back to work. A shovel lays next to the man on the far right, ready to be picked back up. Perhaps this is a fencing crew. 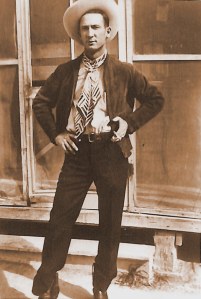 The second image is of a young man dressed for a trip to town, duded up in a cinematic way. The hat is tilted far back on the head; the neckerchief is boldly patterned and carefully arranged. The tight pants accentuate the slim physique and are pulled up Andy Griffith style to show off the polished dress boots. He strikes a masculine pose, carefully cradling the cigarette in his left hand.

Which is the “real” cowboy?  It’s a trick question: the young dude is also pictured in the far right of the group photograph.  One captures a man at work in an unguarded moment; the other is a reflection of the image he consciously chose for the camera.  The second image suggests an awareness of the popular conception of a cowboy; is it possible that the pose is self-mocking? (The pants tucked into the boots would be a starting point for that discussion.)

If just one image of him could be included in a book or paper, which should it be?  Which image reflects more “truth” about life on the ranch?  about him?